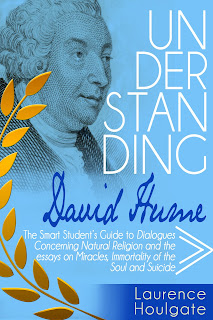 In the eighteenth century, the words “natural religion” referred to religious beliefs based on reason and evidence instead of revelation. In Understanding David Hume, Professor Laurence Houlgate guides beginning philosophy students through the labyrinth of arguments for and against the existence and infinite nature of God, focusing mainly on the famous Design Argument.

This is a philosophy study guide for students who want more substance than the "notes" that are found online.  Professor Houlgate breaks down the more lengthy dialogues into discrete and understandable short chapters, emphasizing critical thinking, but allowing students to easily navigate through the book.

Questions for thought and discussion and ideas for student essays and term papers are to be found at the conclusion of each section.

Because of the frequent condemnation by the conservative Christian clergy in England and Scotland, it is no wonder that most of David Hume’s Dialogues and other writings on natural religion were not published until after his death. Hume was often accused of atheism and other heresies and was denied several university positions, despite his rising fame in eighteenth century scholarship. But Hume never gave up. He insured that his most contentious essays on natural religion would be published posthumously. Although he did not live to see it, David Hume is now regarded as one of the greatest philosophers of the Enlightenment and his writings are considered essential reading in most university courses in the philosophy of religion.

Understanding David Hume is available at low cost in digital and print versions at Amazon.com   https://www.amazon.com/gp/product/B07RN9HQHS