In meditation II of his Meditations on First Philosophy, Descartes writes that the only things he knows with certainty is “I am," "I think” and “I am a thinking thing”. 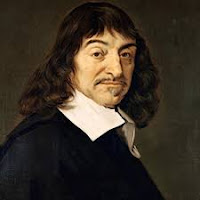 I am--I exist: this is certain; but how often? As often as I think; for perhaps it would even happen, if I should wholly cease to think, that I should at the same time altogether cease to be. I now admit nothing that is not necessarily true. I am therefore, precisely speaking, only a thinking thing, that is, a mind (mens sive animus), understanding, or reason, terms whose signification was before unknown to me. I am, however, a real thing, and really existent; but what thing? The answer was, a thinking thing. [4.2.1]

At this point in  his meditations Descartes reports that he does not know anything else that is certain, including his lifelong belief that there are things “external” to him, for example, physical objects, human bodies, other thinking things, and God.  Descartes finds himself quite alone. But not alone in the universe because for all he knows, he is the universe.  He does not know if there is a universe that exists apart from the content of his own mind.

Descartes knows with certainty that he exists as a thinking thing, that is, a thing that has thoughts, doubts, affirms, denies, and has a multitude of visual, auditory, olfactory and tactile sensations, including the feelings of pain and pleasure.  What he does not know is whether there are any other thinking beings.  He might see or hear what appears to be another human being, but he does not know with any certainty whether he is dreaming or hallucinating the thing that he senses.

This is a theory now known a solipsism, or as some would call it, “all-alone-ism.” It is the theory that although I can know with certainty that I exist, I cannot know with certainty that there are any other thinking beings, nor for that matter, any non-thinking beings. For example, I now have a mental image of a rose bush.  But this is not sufficient to allow me to draw the certain conclusion that there is an actual rose bush, existing external to my mind, that is causing me to have this mental image.  For all that I know, the rose bush I claim to sense might not exist at all.  I might be hallucinating or dreaming about a rose bush.

In meditation VI, Descartes summarizes the reasons why he cannot confirm that physical objects are the cause of the images of physical objects that are in his mind.  His senses give him confusing information about the size and shape of objects.  He cannot distinguish between the ideas he allegedly gets through his senses and the ideas that he has when he is dreaming.  And although he cannot control the images that appear to come into his mind from his senses, this is not sufficient to confirm the existence of an external world because these images could just a well have been caused by some unknown faculty within himself.

Descartes’ solution to these problems is to invoke both the existence and participation of God.  In meditations III and V, Descartes believes he has proved the existence of a supremely perfect God.  He asserts that God has created human beings who “naturally” assume that the mental images or ideas that they have of material objects are caused by real material objects in an external world. The dubious natural “habit” of believing that what we learn from the senses is true is a gift of nature, and “nature, … is nothing more than God himself.” Since God is all-good, he would not deceive us about our natural belief that there is a world external to our mind, populated by physical objects and human beings like us.   Although Descartes admits that the ideas (images) of objects that we receive from or through the senses do not always perfectly resemble the material objects that causes these ideas, he believes that he has made a convincing argument for the claim that solipsism is false.  We live in a world of material objects and other human beings.  We are not alone.

This leaves the reader with two questions.  If there is no convincing argument for the existence of a supremely perfect deity and/or that God would not allow us to be deceived by our senses, are there alternative ways to avoid solipsism?  To be specific, based only on Cartesian assumptions about the large conceptual gap between the internal world of mental ideas (images) and an external world of other minds and material objects, is there a way to bridge the gap that does not involve the deity?

Plato might be of some help here.  In Republic, Book VII, Plato has the character Socrates entertain his friend Glaucon with one of the most famous thought experiments in the history of philosophy: The Allegory of the Cave.

In the allegory, the character Socrates asks Glaucon to imagine prisoners “living in an underground, cave-like dwelling, with an entrance a long way up, which is both open to the light and as wide as the cave itself.  They’ve been there since childhood, fixed in the same place, with their necks and legs fettered, able to see only in front of them, because their bonds prevent them from turning their heads around” (Republic, VII, 514).  They stare at a cave wall on which images are projected. These images are cast from carved figures (puppets) illuminated by a fire and carried by people on a parapet above and behind the prisoners. They see nothing of themselves and one another.  They only see “the shadows that the fire casts on the wall in front of them.”  If one of the prisoners is released from his chains “and suddenly compelled to stand up, turn his head, walk, and look up toward the light, he would first see the puppets and the fire" (id., 515). 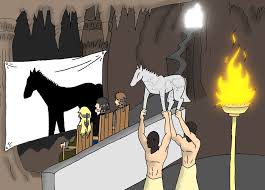 
There is more to the allegory, and there are many interpretations of it.  I will not enter this debate.  I want only to indicate that in the allegory, the prisoners discover and can verify that the images they see on the wall are in fact shadows caused by puppets that are paraded in front of a fire.  The prisoners see all at once the images, the fire and the puppets, thereby confirming the causal connection between them.

Compare this to Descartes’ “prisoners of solipsism.”  They are thinking beings who live in the internal world of their own minds and yet have a “natural” habit of believing that there is an external world of material objects from which their ideas of material objects proceed.  But these prisoners have no way to confirm this causal connection. Unlike the cave prisoners who upon release, see puppets casting shadows on the cave wall, Descartes’ thinking beings cannot put themselves in another  location from which they can “see”  images being projected into their mind by material objects that exist outside their mind. Plato’s prisoners can turn around and see the puppets being manipulated in such a way that they cast shadows on the wall.   But Descartes’ prisoners are trapped in their own mind.  They cannot break out of their mind, go out into the external world and watch corporeal objects cause their mind to be populated with new images.

This brings us to a second question.   Is the problem of solipsism a problem of Descartes’ own making, based on false assumptions, or is it a genuine problem, worthy of our attention?  If it is a pseudo-problem, then Descartes (and those philosophers who he inspired) need to be liberated from their false assumptions.  As the twentieth century philosopher Ludwig Wittgenstein famously put it, the job of philosophy is “to show the fly the way out of the fly bottle.”  Is Descartes a fly trapped by his own unsupported assumptions?

For more commentary and critique on Descartes, see Laurence Houlgate's new book Understanding Descartes: The Smart Student's Guides to Meditations on First Philosophy, available through his website: www.HoulgateBooks.com    Also: once on the website, go to the tab that has a short video in which the allegory of the cave is enacted by clay puppets.